This One ERCOT Chart Explains Why Texas Is Having Electricity Shortages

Twice in mid-July, ERCOT, the state’s grid operator, was forced to ask the state’s consumers to reduce their power use. On the afternoon of July 13, the system had less than 3,000 megawatts of spare capacity as demand hit nearly 80,000 megawatts. That’s not nearly enough reserve capacity.

Since February 2021, when the Texas grid nearly collapsed during Winter Storm Uri, scads of reports and opinion pieces have been written to explain why the electric grid in America’s biggest energy-producing state is so shaky. But there’s no need for complex reports or in-depth analysis to understand why Texans don’t have enough juice.

Instead, Texas’ power woes can be understood by looking at a single chart published last week by ERCOT.

The chart shows that when power demand in Texas surges (the black line), wind generation (green line) often goes to Cancun with Ted Cruz. Indeed, when power demand zigs, wind production usually zags. That’s what happened during the middle of the day on July 13. As demand in the state was soaring, the output from the 35,391 megawatts of installed wind capacity on the ERCOT grid fell to less than 1,000 megawatts. That’s a capacity factor of less than 3%. 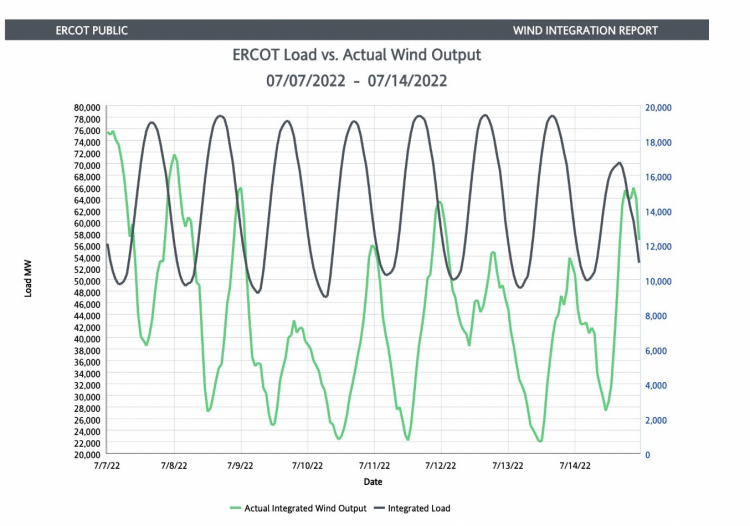 Of course, the wind-energy claque will attempt to dismiss the chart above with some hand waving and shoe shuffling that is usually accompanied by excuses that sound something like this: “yes, but we weren’t expecting wind energy to perform.”

Right. That “we didn’t expect wind to perform” excuse is akin to a sports-team owner paying a star athlete tens of millions of dollars per year (think LeBron James or Tom Brady) and yet saying after the star athlete failed to perform during a championship game, that no one expected to make a game-winning play.

The chart shows that wind energy production is out of phase with times of peak demand. That means the ERCOT grid must have enough dispatchable capacity (usually from natural gas-fired power plants) to meet peak demand. That’s a problem. Why? Despite ongoing population growth and increasing demand for electricity, power producers in the state aren’t building more gas, coal, or nuclear plants. And why is that? The short answer is that investors can’t make enough money on those plants.

In fact, the state has been losing thermal generation capacity. You won’t read about this in the state’s big media outlets, or in the New York Times, but the decline in thermal generation is a huge problem. Between 2014 and 2020, about 6,200 megawatts of coal-fired capacity in Texas was retired. Furthermore, as I explained back in February, over the past two decades, despite rising demand, Texas has not added any new gas-fired generation capacity. Investors aren’t building those types of plants in Texas because the state’s electricity market is being distorted by the lavish federal subsidies for solar and wind energy.

Of course, this ERCOT chart (and others like it, which are available here) never gets mentioned by the tenured academics and climate activists who love to promote the myth that renewables are the answer to our energy needs. Instead, renewable boosters have been claiming that renewables are now “bailing out” the Texas grid. While it’s true that the increasing amount of solar energy production in the state is helping meet demand during times of high demand, the reality is that like wind, solar cannot be dispatched. Yes, more battery capacity could help with that problem. But Texas doesn’t have enough battery capacity.

It’s clear that the Texas grid has become too reliant on weather-dependent renewables at the very moment when the state is being hammered (once again)  by extreme weather. In a recent interview, Madi Hilly, the executive director of the Campaign for a Green Nuclear Deal, told me that policymakers should have been prepared for this result. “It’s no surprise that wind energy goes missing when demand is high,” she said. “Texas spent $60 billion on wind, but the grid has to be ready at any time for the output of all those wind turbines to go to zero.”

Hilly’s remarks echo the conclusions of a report by the Texas Section of the American Society of Civil Engineers which explained why the ERCOT grid came so close to collapse on February 15, 2021. The report says that “ERCOT’s energy-only market model, influenced by federal and state  subsidization of intermittent resources, fails to adequately pay for reliable dispatchable generation and, 2) that these market model deficiencies are the leading contributor to making the ERCOT system less reliable.”

These problems have been known for more than a decade. Eleven years ago, in National Review, I pointed out that during an August heat wave “when the state set new records for electricity demand, the state’s vast herd of turbines proved incapable of producing any serious amount of power.”

Making matters worse: electricity prices in Texas are soaring. As was recently reported by Ben Russell of NBCDFW, the average cost of electricity in deregulated markets in the state has jumped to about 18.5 cents per kilowatt-hour. That’s roughly double the rate from a year ago. Those soaring rates are due, in part, to the state’s over-reliance on gas-fired electricity at the same time that natural gas prices are soaring.

The punchline here is obvious: at the very moment that the Lone Star State desperately needs a resilient electric grid — one that can deliver reliable and affordable juice during the hottest and coldest days — consumers and the grid operators at ERCOT have been left to hope that the wind starts blowing.