On Wednesday, a short item in the Federal Register underscored the regressive nature of the “electrify everything” effort that is being promoted by some of America’s highest-profile environmental groups, climate-change activists, politicians, and academics. The item, published by the Office of Energy Efficiency and Renewable Energy at the Department of Energy, forecasts the “representative average unit costs of five residential energy sources for the year 2021.” 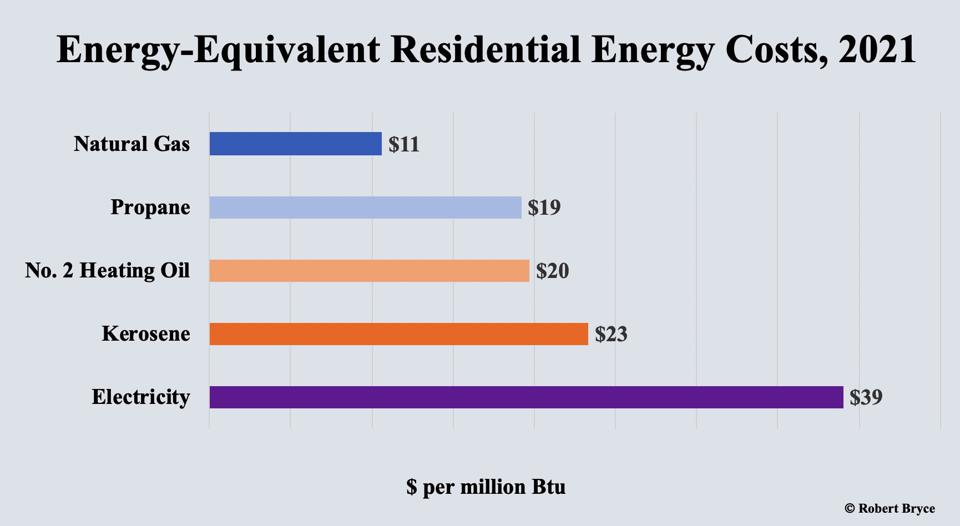 As I wrote in these pages last month during the deadly blizzard that paralyzed Texas for almost a week, there are a myriad of problems with attempting to electrify all of our transportation, industrial and residential energy systems. I wrote, “attempting to electrify everything would be the opposite of anti-fragile. Rather than make our networks and critical systems more resilient and less vulnerable to disruptions caused by extreme weather, bad actors, falling trees, or simple negligence, electrifying everything would concentrate our dependence on a single network, the electric grid, and in doing so make nearly every aspect of our society prone to catastrophic failure if — or rather, when — a widespread or extended blackout occurs.”

Indeed, the risks to our energy security, resilience, and reliability are obvious. But the bigger, and more immediate issue is the regressive nature of forcing consumers to use electricity instead of energy sources like natural gas and propane that sell for a quarter, or half, as much as the energy that consumers can get from the electric grid.

Last year, I published a report for the Foundation for Research on Equal Opportunity that looked at the natural gas bans that are being implemented in dozens of communities in California. According to the Sierra Club, 42 California communities have now imposed bans. On its website, the club, which is the largest environmental group in America, claims that gas-free homes are “a win for our climate, health, and safety.” In January, the city of Denver released a plan that aims to ban natural gas connections in new buildings by 2027. In February, the city of Seattle enacted legislation that bans the use of natural gas in new commercial buildings and large multifamily buildings. In Massachusetts, about a dozen towns have partnered with the Rocky Mountain Institute, which recently got a $10 million grant from the Bezos Earth Fund, to advocate for the right to ban the use of natural gas in homes and commercial buildings.

Banning natural gas forces consumers to use more-expensive electricity to heat their homes, cook their food, and heat the water needed to wash their clothes and dishes. Proponents of the electrify everything push, including the Natural Resources Defense Council, which got $100 million from the Bezos Earth Fund, prefer to call their efforts “beneficial electrification.” The more accurate term is “forced electrification” because it will increase the energy burden on low- and middle-income consumers.

Increasing the energy burden in states like California, which has one of the highest poverty rates in the country, is indefensible. When accounting for the cost of living, 18.1% of the state’s residents are living in poverty. Forcing poverty-stricken Californians to use electricity instead of lower-cost natural gas will increase the energy burden and worsen poverty.

Despite these facts, bans on natural gas are being cheered by some of America’s highest-profile climate activists. In January, Bill McKibben, the founder of 350.org published an article in the New Yorker in which he said if there is a “basic rule of thumb for dealing with the climate crisis, it would be: stop burning things” including natural gas. McKibben says we should shift our energy needs to solar and wind energy. Also in January, Mayor Bill de Blasio declared that New York City will “renounce fossil fuels fully” and “ban fossil fuel connections in the city by the end of this decade.”

In March, Peter Iwanowicz, executive director of Environmental Advocates of New York, declared that policymakers should stop looking at the use of alternative fuels like renewable natural gas because they “distract from the basic task of getting New Yorkers to stop burning things.”

I am pro-electricity. But the idea that we humans should “stop burning things” in the name of climate change ignores the need for energy security, resilience, and basic fairness. Over the past five years, I traveled to India, Iceland, Lebanon, Puerto Rico, Colorado, and New York to look at the world through the lens of electricity. I’ve recently published a book (A Question of Power: Electricity and the Wealth of Nations) and co-produced (with my colleague, Tyson Culver) a documentary (Juice: How Electricity Explains the World)  that spotlights electricity. The book and film show that we need many terawatts of new generation capacity to bring the 3 billion people in the world who are now living in energy poverty out of the dark and into the bright lights of modernity.

In short, the people of the world need more electricity. Lots more. But the Texas Blackouts proved that we need diverse and resilient energy networks that can deliver huge quantities of energy during extreme weather events. Attempting to electrify everything is a recipe for increased inequality and decreased energy security and resilience.