In his inaugural speech today, President Joe Biden spoke about “ a climate in crisis.” Biden has made it clear that climate policy will be one of his administration’s top priorities. If the new president is serious, he should immediately start working to prevent the closure of 5.1 gigawatts of nuclear capacity slated for closure this year.

The reason to keep those nuclear plants operating is obvious: they play a critical role in reducing emissions from the electricity sector. Indeed, the three power plants slated for closure produce about the same amount of electricity as all of the solar capacity in California. (More on that in a moment.) Furthermore, those reactors are providing thousands of high-paid jobs. They also provide stable, baseload power to the electric grid. And unlike solar and wind energy, they don’t require huge amounts of rural land, nor do they need new high-voltage transmission capacity to accommodate their output.

Under his proposed “Energy Efficiency and Clean Energy Standard” Biden has pledged to fully decarbonize the domestic electric grid by 2035. As I explained in these pages last July, achieving that goal in such a short amount of time will be difficult. Achieving it without the massive amount of zero-carbon electricity now being produced by America’s existing fleet of reactors will make that task far more difficult, or maybe impossible.

Let’s look at the numbers. The combined energy output of the three plants slated to be shuttered this year– Indian Point (Unit 3), in New York, and the Dresden and Byron facilities in Illinois – is about 43 terawatt-hours per year. 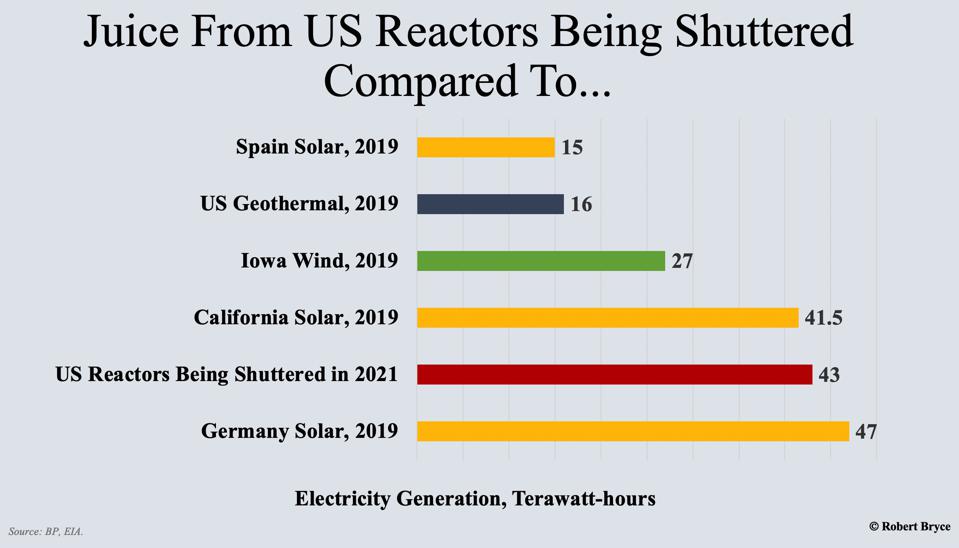 Does Biden have the authority to keep the reactors open and operating? Probably not. But he has the bully pulpit. He should use it to convince Congress to pass legislation that could give the power plants the financial support they need to continue operating. Last August, Exelon Corporation, the owner of the Byron and Dresden plants, said the plants were going to be shuttered because they are “uneconomic” due to “poorly conceived energy policies.” It’s hard to feel sorry for a company as large as Exelon. But it’s also clear that when it comes to low-carbon electricity production, nuclear plants are not competing on a level playing field.

Last month, Congress passed a mammoth spending bill that included extensions for the tax credits given to the solar and wind sectors. According to a December 21 estimate from the Joint Committee on Taxation, the extension of the solar sector’s investment tax credit (ITC) will cost the American treasury another $7 billion between now and 2030. (The ITC may also be used for offshore wind projects.) The extension of the wind industry’s production tax credit (PTC) — which like the ITC was supposed to be phased out — will cost another $1.7 billion. Those billions will be added to the $27 billion in ITC  credits that were already designated for the solar sector and $34 billion in PTC that will be collected by Big Wind between now and 2029.

Shortly after that bill passed, I did a quick analysis of the tax incentives given to various forms of energy. Using Congressional Research data, I found that in 2018, when compared by the amount of energy produced, the American solar industry got roughly 250 times as much in federal tax incentives as the nuclear sector did. The wind sector got more than 150 times as much as nuclear.

There’s no doubt that solar and wind energy are politically popular. Those sectors have powerful lobbies in Washington. But it’s also clear that solar and wind cannot, will not, be able to supply the staggering amounts of energy and power our economy demands at prices consumers can afford. Back in 2015, four of the world’s top climate scientists – James Hansen, Kerry Emanuel, Ken Caldeira, and Tom Wigley — published a piece in The Guardian, in which they declared, “Nuclear will make the difference between the world missing crucial climate targets or achieving them.” They concluded, “The future of our planet and our descendants depends on basing decisions on facts, and letting go of long-held biases when it comes to nuclear power.”

Last summer, for the first time in 48 years, the Democratic Party endorsed nuclear energy in its platform. Today, Democrats control the U.S. House, the Senate, and the White House. Given the looming closure of 5.1 gigawatts of nuclear capacity — and the 43 terawatt-hours of zero-carbon electricity those three plants produce every year — Biden and his climate team need to find a way to keep them pumping out all of that carbon-free juice.