Biden’s declaration has gained lots of attention from the Trump campaign and various media outlets. But his acknowledgment of the importance of hydraulic fracturing is a recognition of practical politics, the critical role that natural gas now plays in the U.S. electric grid, and how the shale revolution has saved consumers at least $1 trillion over the past decade. Those lower energy costs are particularly important to low- and middle-income consumers who are suffering in the pandemic economy, where, according to a recen t article in the New York Times NYT +0.2%, “nearly one in eight households doesn’t have enough to eat.”

If Biden wants to win the White House, he must win Pennsylvania, a battleground state that Donald Trump won in 2016. A candidate who opposes hydraulic fracturing will have a tough time in Pennsylvania, the second-largest gas producer in America, behind Texas. Pennsylvania now produces about 19 billion cubic feet of natural gas per day. For perspective, that’s more than what is now being produced by China (17 Bcf/d) and nearly as much as Iran (24 Bcf/d). Pennsylvania’s oil and gas sector is a big employer and it contributed about $250 million in gas-related fees to the state government last year.

Biden’s statement is also a recognition of the tectonic shift in America’s energy fortunes that is due to the shale revolution. Over the past 15 years, the United States has seen the biggest increase in energy production in world history. Between 2005 and 2019, natural gas production nearly doubled and oil production more than doubled. The result, according to the 2020 BP Statistical Review of World Energy, was a combined increase in oil and natural gas production of about 34 exajoules. That’s an enormous quantity of energy. (In its latest edition, BP has begun using SI units instead of imperial units.) 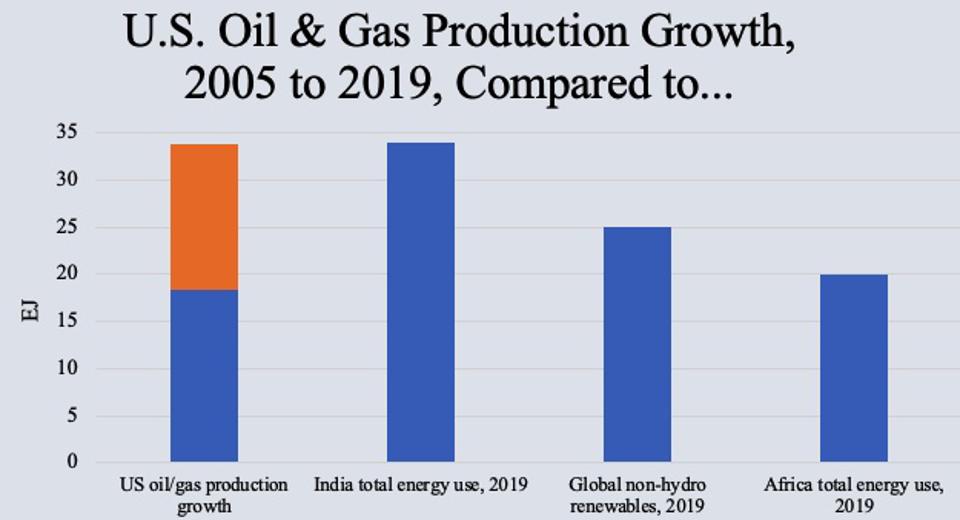 Here’s a comparison: 34 exajoules is roughly equal to India’s total energy use in 2019. Here’s another: that increase in output – again, just the increase in domestic oil and natural gas production over that period – was greater than the output of all global non-hydro renewable energy (solar, wind, and biomass) production in 2019.

The surge in production has turned the U.S. from a major importer of crude oil and natural gas to one of the world’s most important exporters of both of those fuels. The surge has also led to an overhaul of the domestic electric grid. Coal-fired generation of electricity is plummeting. Gas-fired generation is soaring. In 2019, domestic coal use fell by about 15 percent to about 11.3 exajoules, the lowest level since the 1960s. And that decline is expected to continue. Meanwhile, natural gas consumption has soared.

Since 2011, more than 100 coal-fired power plants were converted to, or replaced by, gas-fired generators.  When nuclear plants in California, Vermont, and New York were closed, the bulk of their production was replaced by gas-fired generators. In July, the U.S. electric grid set a new one-day record for the amount of natural gas that was burned to generate electricity: 47.2 billion cubic feet.

A few days ago, I talked to Rick Olesen, the president and CEO of Iowa Lakes Electric Cooperativein Estherville, Iowa. Olesen’s coop has about 13,000 customers and is a big producer of wind energy. Olesen told me, “If the natural gas supply is compromised due to a fracking ban or increased regulation, we are going to be facing very significant issues, and prices could spike. We have replaced coal and nuclear baseload generation with natural gas and intermittent renewables. If they ban fracking I’m very nervous about that.”

Olesen also said that gas-fired generation in Iowa – which like Pennsylvania, is a battleground state — is unlikely to be replaced by wind. “There’s a lot of wind generation” in Iowa, he said. But “trying to site a new wind generation project has become increasingly difficult due to significant, and very organized, landowner resistance. It’s not impossible to site a new wind project, but it has become much more complicated, drawn-out, and costly.”

The bottom line about the shale revolution and hydraulic fracturing is, in fact, the bottom line. Last October, the White House Council on Economic Advisers published a report which said the shale revolution “saves U.S. consumers $203 billion annually, or $2,500 for a family of four.” It continued, saying that “Nearly 80 percent of the total savings stem from a substantially lower price for natural gas, of which more than half comes from lower electricity prices. Oil accounts for the other roughly 20 percent of the savings.”

Critics might say that the Council on Economic Advisers is exaggerating the cost savings. But even if the savings are half of what the council is claiming — $100 billion per year — it still means that over the past decade, American consumers have saved about $1 trillion because of hydraulic fracturing. That’s a lot of money.

Energy costs are particularly important to the low- and middle-income voters that Biden needs to beat Trump. To be sure, there are a lot of issues facing the electorate. But energy policy is a fundamental issue. My prediction: voters are going to hear a lot more about hydraulic fracturing between now and November 3.